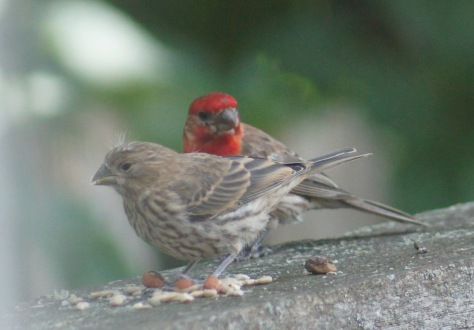 A Crossbill and its bride
were standing side by side.
Displaying what’s unique
about his namesake beak
that seems a bit lopside.’

Another source of pride;
red feathers, dignified,
providing look so chic.
A Crossbill.

His mate takes it in stride.
He’s prettier outside.
Despite her fine physique,
her colors are more bleak.
It cannot be denied.
A Crossbill.

Yes, I know that word should be lopsided. Thus the ‘.

This pair of birds are Crossbills that landed on my deck railing for some seeds. As you can see, the male is more colorful than the female. The Crossbill from the genus, Loxia, of birds in the finch family (Fringillidae). The genus name is from the Ancient Greek loxos, “crosswise”. Crossbills are specialist feeders on conifer cones, and the unusual bill shape is an adaptation which enables them to extract seeds from cones. These birds are typically found in higher northern hemisphere latitudes, where their food sources grow, but are not averse to an easier lunch, like from my feeder. Crossbills and Redpolls share a common ancestror and only diverged during the Tortonian (Late Miocene) era. Source: Wikipedia.

This poem is a variant of the Rondeau, inspired by Pantygynt. It is written in iambic Trimeter, rather than more typical Tetrameter or Pentameter. It still follows the usual Quintrain,Quatrain, Sestet formula with the rhyme scheme of: aabba – aabR – aabbaR, where the R represents the first word or a short phrase from the first line of the poem.

This picture was taken by the author himself on August 14, 2016.