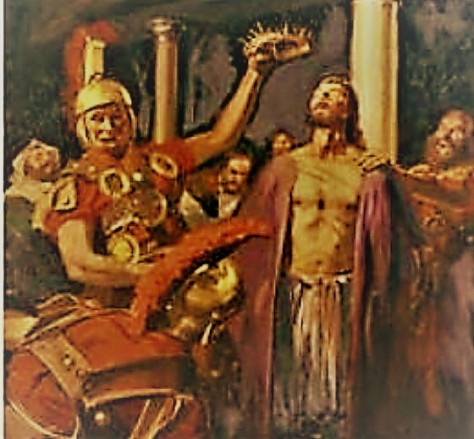 On Friday morning, they brought Him
To Pilot’s palace, stayed outside,
As during Passover, it would “defile” Jewish pride.
So, he came out, “What’s this about?”
“He claims to be Messiah — King.”
“That’s not a crime,” Pilot replied.
“He’s causing riots, here to Galilee,” they implied.
“Then he’s Herod’s problem, no doubt.”

Now Herod happened to be in Jerusalem,
And anxious to see Jesus, to examine Him.
Concerning that, “I’d like to see a miracle.”
But Jesus really was inimical,
Remaining silent here, before this Jewish king,
Whose reign portrayed the very worst of everything.
Then Herod mocked Him, and abused His countenance,
Regaled with purple robe and such appurtenance.
The beatings and cajoling caused no great effect,
And Jesus’ non-response gave Herod no respect.

King Herod, found he nothing to attack,
To Jews chagrin, he sent our Jesus back.

“So you’re King of Jews?” Pilot asked.
“I am,” said Christ. “As thou said it.”
“You are a king then?” Wanting to see what He’d admit.
“My kingdom is not of this world.”
“He’s innocent! I’ll have him whipped.”
Then sent Him to the penal pit
To scourge with leaded thongs, that caused skin to tear and split,
While scorn and much abuse was hurled.

With long thin thorns a crown was placed upon his head,
Then pounded in with canes, ensuring that it bled.
They stripped His clothes, then dressed him in some purple robe,
Sat Him on stool, and gave a stick as scepter probe.
“Hail, King of Jews!” they mocked, then brought Him back to view,
Where Pilot looked Him over, asking “Who are you?”
The answer came, “I’m here to bring the world the truth.”
“Truth? What is truth?” He replied, Rome’s judicial sleuth.

As scene for pity’s sake, was Pilot’s plan.
He showed Christ to the crowd, “Behold the Man!”

Modification Note:
I have totally rewritten The second cycle of Part 2, because I felt it too condensed. I wanted to include more about the scourging, the Ceasar comment, and include Pilot’s famous statement “Truth? What is truth?” So, I totally rewrote the first eight lines, that previously read:

“Are you a King” he asked Our Lord.
“My kingdom is not of this world.”
“We’ll see, when whips have laid the skin of your back unfurled.”
A crown of thorns placed on His head,
Before the crowd, “Behold the man!”
“On this feast, one man can be released”
“Barabus or him?”
“Barabus!”
Then they were appeased.
“What of him?”
“Crucify him, dead!”

Previous Author’s notes;
It’s interesting to note that, of the four Evangelists writing about this event, only Luke mentions the trip from Pilot to Herod, and back. This poem tries to cover both events within two Queriet cycles. Although greatly paraphrased, I believe I covered most of it, considering all four of the descriptions.

In the poem, I would forego the Christian convention of capitalizing pronoun references to Jesus, when spoken by a non-believer.

Inimical – not friendly
Appurtenance – an object, or piece of equipment, used for a particular situation.
Blasphemy – profane abuse of God, claiming to be God.
Cajole – to try to influence, coax, wheedle.
Countenance – a person’s face or likeness, their physical being.

This poem is a Queriet.
The Queriet is a newly created format by our very own Pantytgynt. It is a very complex form, that is useful with question/answer dialogue, and is my first attempt at his instructions from his poem, Beltane Sacrifice.
“Feeling the need for another poem in which the Q & A form would be appropriate, I thought I would try to write to a similar form which I now christen the “Queriet” from the queries or questions that are an essential feature of what has here become the first eight line stanza. You can have as many questions and answers as you wish but this first stanza of each cycle must contain at least one. This stanza is syllabic to the syllable count of 8,8,13,8,8,8,13,8 and the rhyme scheme for this stanza is abbcdbbc.
If appropriate both question and response may come from one and the same person, as in a soliloquy. I have not found this necessary here.

The second part of the cycle contributes more detail and covers 10 lines of metered rhyming couplets. Any meter consistent over the 10 lines can be used. Here I have gone for iambic heptameter.

The whole poem concludes in the manner of a sonnet with a rhyming couplet of iambic pentameter.”

However, for my poem in the second section, I chose the Alexandrine meter, or Hexameter (12 syllables).

The picture is from Yahoo images.