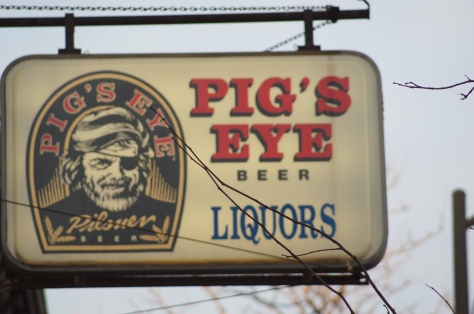 Now hear the story of Pig’s Eye Perrant,
And a town named with a different slant.
We’d much rather forget it, but we can’t!

Have you visited the town of Pig’s Eye?
It’s known today as the city St. Paul.
Once, it was a danger to passer’s bye
From a river pirate with strange eyeball
Who terrorized travelers, one and all.

He brewed nasty batches of bitter hooch
To Indians and the military.
He often offended the ladies he’d smooch
‘Cause his white circled pupil was scary,
So, he never found one he could marry.

The Tavern built by his cave was a shack.
He was often known to be rather rude.
Some of his customers never came back
Because his wilderness habits were crude,
And they didn’t like the things he pursued.

This bloodthirsty fiend was an evil knave.
He’d come out to pillage river traffic.
Then hide stolen loot in a river cave,
And to get just a little specific,
His impact on settlers was horrific.

The town nearby was named Pig’s Eye Landing,
Danger and piggish manners they abhor.
Citizens deplore their tawdry standing,
Not enamored by this famous neighbor,
Moved to lose this big threat and his liquor.

They gathered up the courage to report,
A delegation trip was quickly planned.
Approaching Colonel Snelling at the fort,
To eliminate Pig’s Eye from their land,
They asked for the Army to take a stand.

Then a troop of soldiers was soon dispatched,
In the morning, while the day was still young.
From his dark lair Pig’s Eye was quickly snatched,
As the soldier’s trap had been smartly sprung.
Since that day, his fateful story’s been sung.

That town was then renamed, after their church.
Its citizens no longer lived in fear.
His name still echoes about, if you search,
On city dump and some bars around here.
Still, after him, they named a Pilsner beer.

So, that’s the story of Pig’s Eye Perrant,
And the town named with a different slant.
We’d much rather forget it, but we can’t!

Author Notes
An Early Settler of Bad Renown. Glad they changed the Name of the Town. Who’d want the Capitol City to be Named Pig’s Eye.

According to A History of the City of Saint Paul by John Fletcher Williams (published in 1847), one of the first settlements in the St. Paul, MN area was located at Fountain Cave, alongside the Mississippi River (not far from where current day Shepard Road and Randolph Ave intersect). Pierre Pig’s Eye Parrant, a retired fur trader and person of dubious reputation, built the area’s first structure known as the whiskey seller’s cabin at the mouth of this cave in 1838. The cave had a very clear, cold stream flowing out of it and into the river.
Parrant was a coarse, ill-looking, low-browed fellow with one good eye. His bad eye had a sinister white ring around the pupil, giving it a kind of piggish expression to his features and he became known as Pig’s Eye.
Pig’s Eye snuck over territory lines and found this rather convenient spot from which he could raid river travelers and sell bootleg whisky to soldiers and Indians without the pale of law. In 1838, Parrant erected a cabin at the mouth of the cave to sell liquor from. Locals called the area Pig’s Eye Landing based on Parrant’s popular tavern.
His Pig’s Eye Tavern flourished, but in 1840 he was evicted by soldiers from nearby Fort Snelling.

Eventually Schmidt Brewery made beer at that site. That spring water in the cave have been the foundation for many beers. Today, Landmark Beer owns it. There’s a tap outside the Brewery where any citizen can come and fill up jugs of water for free.

The Picture is author’s photograph.