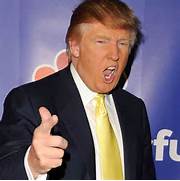 Donald J Trump,
Is often quite a grump.
Political correctness he disdains.
He won’t suffer fools with no brains.

Hillary Clinton,
Opponents are hintin’,
Cannot be trusted to play by the rules,
When it comes to securing her internet tools.

Just some political observations based on convention viewing.

This poem is a Clerihew.
A Clerihew is a comic verse consisting of two couplets and a specific rhyming scheme, aabb invented by Edmund Clerihew Bentley (1875-1956) at the age of 16. The poem is about/deals with a person/character within the first rhyme. In most cases, the first line names a person, and the second line ends with something that rhymes with the name of the person. The last two couplets usually contain a humorous or satirical statement. No meter requirement.

This picture from two Yahoo images.