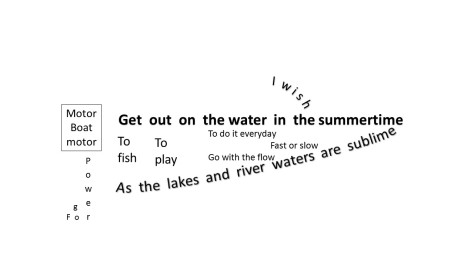 I’ll float my boat.
On pool or moat
Oceans or seas
Wherever I please

My poor attempt at a boat Calligram. Not as good as the car I posted yesterday, but just as fun to do. I hope you like it anyway.

This poem is a Calligram
A Calligram is a poem, phrase, or word in which the typeface, calligraphy or handwriting is arranged in a way that creates a visual image. The image created by the words expresses visually what the word, or words, say. In a poem, it manifests visually the theme presented by the text of the poem. Guillaume Apollinaire was a famous calligram writer and author of a book of poems called Calligrammes. His poem written in the form of the Eiffel Tower is an example of a calligram.

The image was created by the author using a WordArt program and Powerpoint. I had to use Powerpoint because I couldn’t get it to work in the Word Program, I then saved it as a JPG.