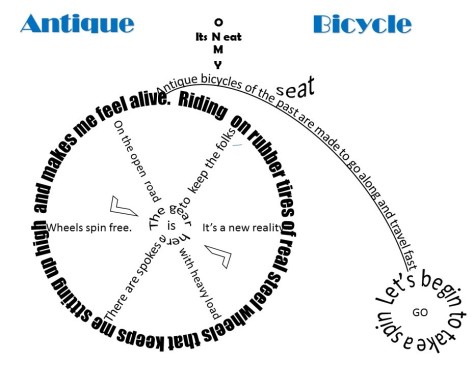 I hope you like my antique bike.
The Penny-farthing style will go a merry mile.

The Penny-farthing, also known as a high wheel, or high wheeler, is a type of bicycle with a large front wheel and a much smaller rear wheel. It was popular in the 1880s. It was the first machine to be called a “bicycle”. Although the name “Penny-farthing” is now the most common, it was probably not used until the machines were nearly outdated. It comes from the British penny and farthing coins, one much larger than the other, so that the side view resembles a penny leading a farthing. Although the trend was short-lived, the Penny-farthing became a symbol of the late Victorian era. Its popularity also coincided with the birth of cycling as a sport. Source: Wikipedia.

Unfortunately, I can’t get the image large enough, so several people have said they can’t read the words, so I thought I’d help out by listing the text here.

it’s neat on my seat.

Antique bicycles of the past
are made to go along
And travel fast.

Riding on rubber tires
Of real steel
That keeps me sitting up high
And makes me feel
Alive.

The gear is here

Wheels spin free, it’s a reality.
There are spokes, to keep folks
On the open road, with a heavy road.

This poem is a Calligram.
A Calligram is a poem, phrase, or word in which the typeface, calligraphy or handwriting is arranged in a way that creates a visual image. The image created by the words expresses visually what the word, or words, say. In a poem, it manifests visually the theme presented by the text of the poem. Guillaume Apollinaire was a famous Calligram writer and author of a book of poems called Calligrammes. His poem written in the form of the Eiffel Tower is an example of a Calligram.

The image was created by the author using a WordArt program in PowerPoint. I had to use PowerPoint because I couldn’t get it to work in the Word Program, I then saved it as a JPG.